Funnel reports allow you to track the conversion rate and revenue generated at each step of a marketing funnel.

In a Funnel Report, you define up to 7 steps that people will undertake during the funnel, whether that is having a tag applied, clicking on a link or purchasing a product. Each of these steps is defined by using a number of standard SegMetrics Filters. After creating the funnel steps, you can easily see how many people complete each step of the funnel, as well as the revenue and lead value at each step.

First, to create a new report, click on the Funnels report from the main menu.

Then set up the steps to define the Funnel. 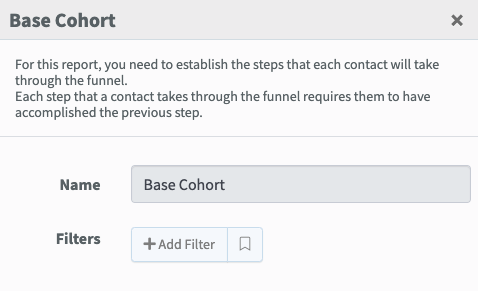 The Base Cohort are the filters that are applied to everyone in the Funnel. These filters will determine what leads will be included in the initial step of the Funnel

Click Add new step to funnel to add an additional step to the Funnel.

Additional steps will have their filters applied in order, so that each step in the funnel builds on the step before it.

The above steps will produce the following report:

Once you have defined the steps in your Funnel Report, click on  Apply Steps to set the data and display the report.

Funnel Reports default to showing you how many  Leads go through each step of the funnel.
NOTE: In contrast to most reports Leads will be filtered by Purchases.

At any point you can switch the main metric that the graph shows between the 5 available metrics:

At the top of the Funnel Report is an overview of how well the funnel is performing for the 4 funnel steps.

The Funnel Graph shows a visual representation of how the metrics change over each step in the funnel, and the percentage of change, both from the previous step as well as compared to the funnel overall. In this graph, we can see that the number of leads who purchased is 8% of all contacts who joined the funnel.